After I was commissioned to take a series of personal branding headshots for a talented fellow photographer recently, I came away from the shoot with two insights. The first? Corporate headshots are absolutely the most important investment you can make for your personal branding right now. The second? Even after many years as a pro, it’s entirely possible to still get a touch of the old nerves. Oh, and I also got an amazing gift, but more on that later.

When accomplished photographer Mike Bowden, who now works for maritime logistics giant Cory Brothers, commissioned me to capture some headshots of him, I confess I was as jittery as I was flattered. After all, I’ve long been inspired by Mike’s ‘scroll stopping’ approach to commercial photography and the headshots of his colleagues that he produces. He just needed some of him! Capturing a fellow Pro is a huge deal in our world so it’s no surprise that come the day of the shoot, I found myself awake well before my alarm went off. 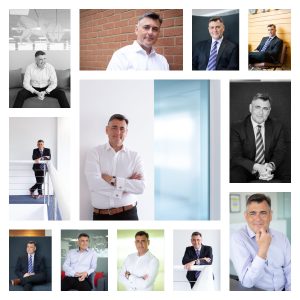 Luckily for me, Mike is a warm and friendly man, and as I channelled my nervous energy into small talk, he told me he felt nervous having his headshot taken. In fact, it turned out he was just as nervous as I was! With that, the ice was broken, and we bonded over our shared amusement that whether you’re a newly minted pro on your first shoot, or a grizzled veteran with decades of experience, those nerves still exist! In truth, knowing that such an accomplished photographer felt the exact same way was comforting. Before I knew it, the time had passed very quickly, and I had a series of personal branding headshots in the bag.

Now I just had to show them to him and (gulp), hope he was okay with the results…

As it happened, Mike was over the moon! And that has to rank up there as one of the proudest moments of my career. It meant so much to me that a pro of Mike’s calibre had entrusted me with creating this key piece of his personal branding.

But I also got something else amazing from that day. Mike, being the seasoned pro he is, couldn’t resist going on a busman’s holiday, and took a few headshots of me. His results speak for themselves, and you can check them out on my social media pages. He really captured the warmth and approachableness that I like to think I offer to my clients. I have put them front and centre in my branding in the places where people come to look at my services.

Getting ahead with a headshot.

One thing that doing the shoot with Mike really underlined for me, was just how important natural, candid looking headshots really are now for personal branding. We are long past the era when corporate headshots looked like overgrown college yearbook photos.

We live in the world where professional relationships not only begin online, but continue in this way over the long term, without face-to-face meetings ever taking place. Even so, despite the distance digital communication has put between us in this remote working era, people still like to do business with other people. They still want to know who they are dealing with. 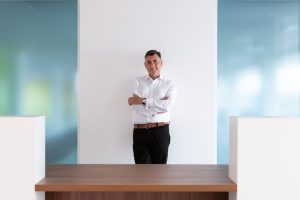 And that’s where your headshot comes in. Whether it’s there in your email profile, on your Twitter image, or the ‘about you’ section of your website, that headshot needs to do a lot of heavy lifting. It’s where the ‘real you’ has to come across at a glimpse.

Personally, that’s why I like to channel that nervous energy I get on set into small talk. I like to see my clients smile, laugh, and generally forget that there’s a camera pointing in their direction. When I can do that, I can really capture their warmth, their friendliness, their professional steel. And generally, at some point, it’s just a matter of capturing the right moment. The moment that becomes an image that brings your face, and personality to life on a computer or smartphone screen. And puts their best face forwards.

Going back to Mike, what strikes me the most about the day of that shoot, is how he managed to capture an image that made me look so completely relaxed and at ease, and I was able to do the same for him. I think that’s the other side of what a headshot can do for your personal branding. It’s just as much about conveying what you want people to take away from your image. Mike may have been nervous, but he looks confident, in control, professional yet approachable in his images. That’s what the talent a great photographer can bring to a project, and that’s the power of personal branding.